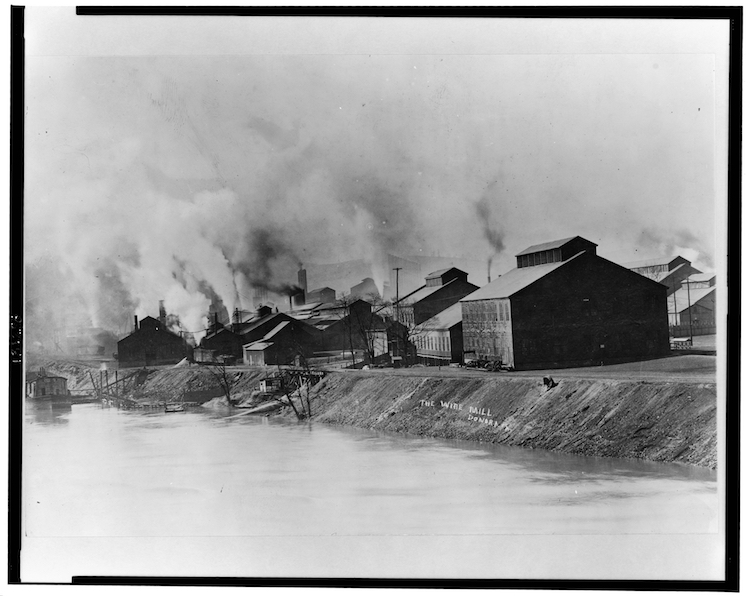 The wire mill, Donora, PA. This image is available from the United States Library of Congress's Prints and Photographs division under the digital ID cph.3c31258.

Many believe that the 1948 Donora smog was the worst air pollution disaster in U.S. history. A Smithsonian Magazine article (Boissoneault, 2018) describes the event; a summary of excerpts from the article follows:

By 1902, Carnegie Steel had installed a facility in the immediate region, complete with more than a dozen furnaces; by 1908, Donora had the largest volume of railroad freight traffic in the region; by 1915, the Zinc Works began production; and by 1918 the American Steel & Wire Company paid off its first fine for air pollution damage to health.

On Saturday October 30, around 2 a.m., the first death occurred. Within days, 19 more people from Donora and Webster were dead. A preliminary report was released in October 1949, with inconclusive results. Rather than singling out the mills and the effluent they produced, the researchers pointed to a combination of factors: the mills’ pollution, yes, but also a temperature inversion that trapped the smog in the valley for days (a weather event in which a layer of cold air is trapped in a bubble by a layer of warm air above it), plus other sources of pollution, like riverboat traffic and the use of coal heaters in homes.

Following the deadly smog, President Truman convened the first national air pollution conference in 1950. Congress did not pass its first Clean Air Act until 1963, but progress continued steadily after that, with President Nixon creating the Environmental Protection Agency in 1970, the same year that Congress passed a more comprehensive Clean Air Act.

A recent article (Jacobs, 2018) has revisited the Donora smog, and an excerpt from the abstract states: "At a storefront museum approximately 25 miles southeast of Pittsburgh, Pennsylvania, a sign reads, “Clean Air Started Here.” This is not hyperbole. At the end of October 1948, the communities of Donora and Webster in Pennsylvania were visited by a smog that changed the face of environmental protection in the United States. Conservative estimates showed that 20 individuals died, while an additional 5900—43% of the population of Donora—were affected by the smog."