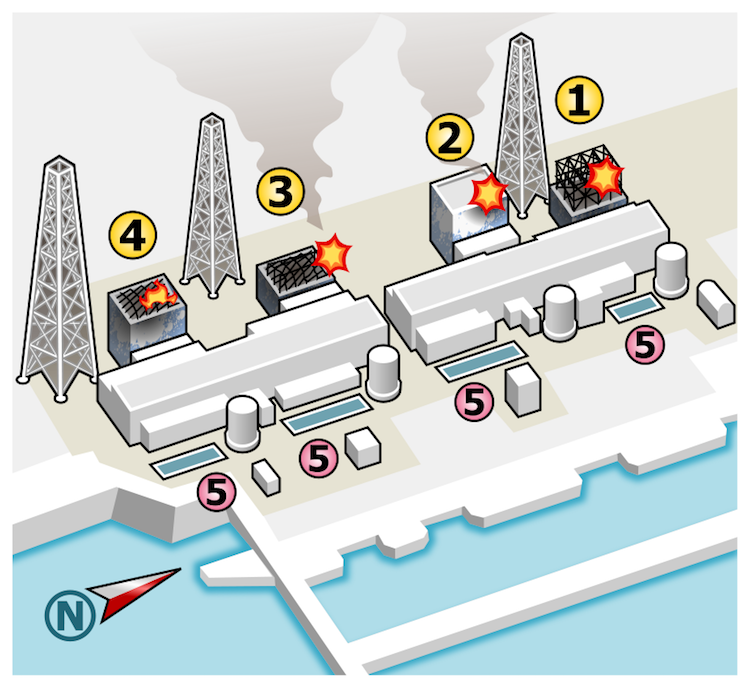 Image from Wikimedia Commons. This file is licensed under the Creative Commons Attribution 3.0 Unported license.

The U.S. Nuclear Regulatory Commission describes the Fukushima Dai-ichi Nuclear Accident in their "Backgrounder on NRC Response to Lessons Learned from Fukushima":

On March 11, 2011, a 9.0-magnitude earthquake struck Japan about 231 miles (372 kilometers) northeast of Tokyo off the Honshu Island coast. Eleven reactors at four sites (Fukushima Dai-ichi, Fukushima Dai-ni, Onagawa, and Tokai) along the northeast coast automatically shut down after the quake. Fukushima Dai-ichi lost all power from the electric grid, with diesel generators providing power for about 40 minutes. At that point, an estimated 45-foot-high (14 meter) tsunami hit the site, damaging many of the generators. Four of six Fukushima Dai-ichi reactors lost all power from the generators. The tsunami also damaged some of the site's battery backup systems.

Units 1, 2 and 3 at Fukushima Dai-ichi were operating when the earthquake hit. Units 4, 5 and 6 were shut down for routine refueling and maintenance. One of Unit 6's diesel generators continued working, providing power to keep both Units 5 and 6 (at right in the photo) safely shut down. Steam-driven and battery-powered safety systems at Units 1, 2 and 3 worked for several hours (and more than a day in some cases). Those systems eventually failed and all three reactors overheated, melting their cores to some degree. The conditions in the reactors generated extreme pressure, causing leaks of radioactive gas as well as hydrogen. The hydrogen exploded inside the reactor buildings of Units 1, 3 and 4, damaging the buildings and releasing more radioactive material from Units 1 and 3. Radioactive contamination spread over a large area of Japan, requiring the relocation of tens of thousands of people. Japanese authorities eventually stabilized the damaged reactors with alternate water sources.

Several studies addressed the model simulation of the radioactive plume in the atmosphere. Examples are listed below. These include simulations for long-range transport to Korea (Lee, 2015), southeastern Asia (Huh, 2013), and North America (Mészáros, 2016).